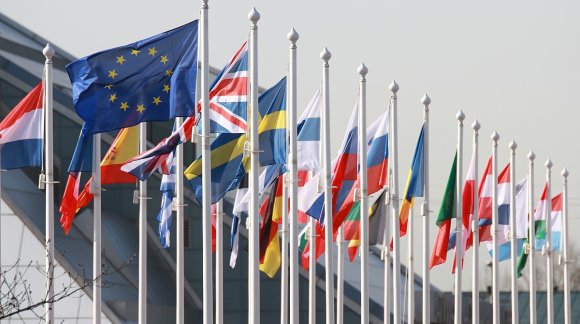 In its capacity as the Presidency of the Council of the European Union (EU), Latvia will host a major high-level foreign policy event – the Eastern Partnership (EaP) Summit – in Riga on 21-22 May.

The Riga Summit is expected to confirm the strategic importance of the EaP policy as a specific dimension of the European Neighbourhood Policy. The Summit will also address the current issues and challenges related to the implementation of the EaP and outline the main directions in the EU’s cooperation with partner countries in the coming years.

The Riga Summit will be launched on 21 May by an official working dinner for heads of EU and EaP Member States. The Summit’s Plenary Session will take place at the Latvian National Library on 22 May to be followed by a press conference. The Summit is expected to issue a joint declaration that will review the achievements so far and map out the priorities and goals of the EaP with a view towards the next summit.

It is expected that one of the key political messages of the Summit will be to confirm the strategic significance of the EaP policy and emphasise readiness to develop and deepen the EU’s bilateral relations in a differentiated manner with each of the six partner countries on the basis of jointly formulated priorities.

The multilateral framework of the EaP policy ensures a common platform for building sectorial cooperation at various levels and engagement of the wider public in cooperation. The Summit will underscore the EaP policy-making principles – a partnership based on openness, transparency and shared goals, and emphasise the fact that the EaP is neither confrontational nor directed against any third parties.

The Riga Summit will be the first since the signing of the Association Agreements between the EU and three partner countries – Georgia, Moldova and Ukraine. These agreements provide for closer political association and economic integration between the EU and those countries. The Summit will review the preliminary results of the provisional application of the Association Agreements. Successful implementation of the agreements will be one of key priorities in the EU’s relations with Georgia, Moldova and Ukraine, which will enable these partner countries to modernise their economies and social system.

The Summit will also explore the development of opportunities offered by the EaP policy in cooperation with the other three partner countries – Armenia, Azerbaijan and Belarus. The EU will confirm its readiness for a more tailor-made approach in its dialogue with these partner countries, deepening mutually beneficial cooperation with each of them.

The Riga Summit will provide a platform for taking stock of the progress made with each of the six partner countries since the third Eastern Partnership Summit in Vilnius in the areas such as mobility (visa facilitation and short-term visa waiver), sectorial cooperation, EU support for reforms in the partner countries, the development of people-to-people contacts, as well as cooperation in energy, transport and other fields.

The summit discussion at the highest political level will also provide additional input to the report on the review of the European Neighbourhood Policy.

Three high level side-events will take place as part of the EaP Summit in Riga: 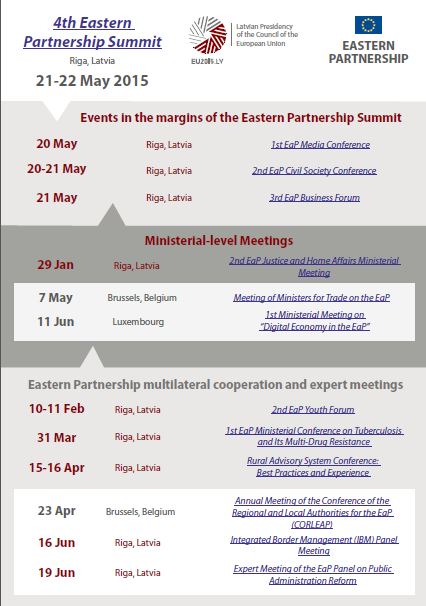 On 20 May, Riga will host the First Eastern Partnership Media Conference on current challenges to the media and pluralism in the EaP countries, and improvement of the media environment in the Eastern Neighbourhood region.

On 21 May, the Third Eastern Partnership Business Forum will continue an established tradition and focus on intensification of business contacts between companies in the European Union and in EaP countries.

Infographic: Eastern Partnership events in the margins of the EaP Summit

Media accreditation for all Eastern Partnership events on the following page of the Latvian Presidency website - EU2015.LV.