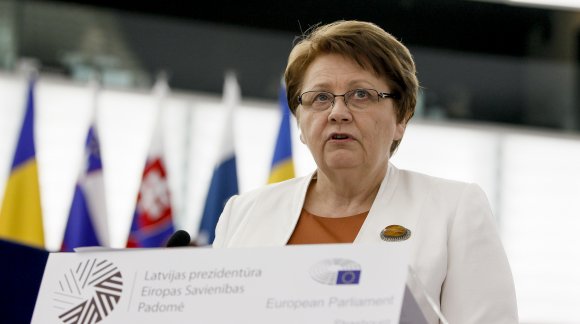 On Tuesday, 7 July, Laimdota Straujuma, Prime Minister of the Republic of Latvia, addressed the plenary session of the European Parliament (EP) and presented overview of the Latvian Presidency in the Council of the EU.

President of the European Parliament,

President of the European Commission,

First of all I would like to express my gratitude to President Mr. Schulz for his kind words.

It is my great honour to return to the European Parliament after six months of very intense work in order to discuss the progress made by the Latvian Presidency.

The past period has been a very dynamic and challenging time for Europe, as well as a great responsibility and a unique experience for Latvia.

But life brought in its corrections. Terrorist attacks and the humanitarian crisis at the borders of Europe required an immediate response by the European Union. At the moment all thoughts are on Greece.

Although Latvia lead the Council of the EU during a period of crises, turmoil and uncertainties, I can be proud of my country for its successful first presidency since Latvia's accession to the EU before 10 years. We have been able to implement our strategic priorities.

I would like to specially underline involvement of civil society and social dialogue as the foundation of activities undertaken during the Presidency.

At the preparation phase and during the progress of the Presidency we maintained an intense dialogue with the European Parliament. It has provided an invaluable contribution to the successful conduct of the Latvian Presidency.

I am convinced that we can only achieve results and succeed, as well as promote citizens' confidence through cooperation among authorities and by joint efforts.

The good and constructive cooperation has allowed us to push forward the priorities and daily activities pragmatically and effectively, as well as to respond quickly to the new challenges and crises.

Together with the European Commission and the European Parliament we have made committed efforts on drafting legal acts. We have achieved a good progress in many areas; we have reached significant agreements and attained concrete results.

Today I would like to take stock of what has been achieved by singling out the most important results of the Presidency. These are achievements to the benefit of all people living in Europe.

We managed to reach an agreement on the European Fund for Strategic Investments in record time. The Fund will launch work already this summer to promote investment attraction of to the European economy. I would like to thank the European Parliament and the European Commission for intense work on this very important issue.

We have laid the foundation for the European Energy Union aimed at strengthening EU's energy independence and promoting a common energy policy throughout the European Union.

We focused on ensuring consumers stable and reasonable energy prices, broader options on the energy market and clearer information regarding suppliers.

The Latvian Presidency ensured the adoption of decisions that are important for the establishment of the European Energy Union, by facilitating the transition to a low carbon economy and thus increasing the EU's energy independence.

The Latvian Presidency reached an agreement on the submission of the EU's commitment to climate change mitigation after 2020, ensuring timely contribution of the EU to preparing the Climate Change Conference in Paris.

We share the view that we should go hand in hand with the digital technology development in order to ensure public adaptation to the digital era.

To this end, we have agreed on actions aimed at widespread use of digital solutions in business. Theses include aspects of digital data accessibility and security, as well as ensuring digital skills.

The Latvian Presidency devoted special attention to the use of the European digital economy's potential. Further development of the digital single market is crucial for Europe's competitiveness, growth and employment.

The Latvian Presidency devoted its best efforts to ensure the progress of the relevant and, at the same time, sensitive legal acts, which were essential for establishment of the digital single market.

I warmly welcome the adoption of the General Approach to the Proposed General Data Protection Regulation at the Council on June 24 that allowed for opening negotiations with the European Parliament. Data protection is an essential pre-condition for the successful development of the digital single market and protection of the fundamental rights of European citizens.

During the last days of the Presidency we reached an agreement on the proposal for the telecommunications single market envisaging the abolition of roaming surcharges and access to open Internet. This important achievement of our Presidency ensures benefits to everyone living in the EU as the agreement envisages a significant reduction of the roaming charges starting from April 30 next year.

In addition, we agreed with the European Parliament on the general principles on the Network and Information Security Directive. I hope that after the technical elaboration of the proposal, we will, very soon, have a framework that will provide better protection against cyber-attacks.

Over recent months, migration has become one of the most pressing EU issues.

By implementing the guidelines approved by the European Council, the Council has made progress towards preventing loss of life in the Mediterranean, combating people smuggling networks, strengthening cooperation with the countries of origin and transit, as well as providing assistance to the EU Member States facing the most intense migration pressure.

Migration is a complicated issue. A sustainable solution may only be achieved by a targeted, comprehensive and balanced approach systematically implemented step by step.

It is essential to ensure that the proposals are supported by all EU Member States. We should find a balance between solidarity and responsibility which are essential elements of the migration policy of the European Union.

We should protect those in need of protection. However, it is not sufficient to undertake protection measures. They should be go hand in hand with an efficient system for returning illegal migrants.

In June, the EU interior ministers approved the updated Internal Security Strategy of the European Union. It sets the fight against terrorism and radicalization, organized crimes and cybercrimes as the priorities for next five years, as well as draws attention to the new security challenges that we face, including hybrid threats.

The events of recent weeks once again reminded of the terrorist threats facing the European Union.

I would like to recall that we have kept our promise to reach an agreement in the Council regarding the Date Protection Package.

We hope that by the end of this year an agreement will be reached regarding the European Passenger Name Record.

I acknowledge the review of the EU Security Strategy started by the High Representative, Vice-President of the Commission.

We are grateful that Rīga Summit confirmed stable relations of the EU with the countries of the Eastern Partnership.

Meanwhile, in view of the differentiated approach an essential challenge will be ensuring unity of the Eastern Partnership.

Together with the European Parliament the Latvian Presidency succeeded in reaching an agreement on macro-financial assistance for Ukraine.

We are pleased that the EU has maintained its unity regarding Russia by reiterating that it is important to implement the Minsk agreement.

I would like to remark that during our Presidency the region of Central Asia was again included in the agenda of the European Union. The European Union should not underestimate the importance of this region.

Foreign trade and investment attraction are also essential to promoting economic growth. I therefore consider that timely completion of the EU-US negotiations on the comprehensive and mutually beneficial Transatlantic Trade and Investment Partnership Agreement, that you will discuss very soon, is very important. We look forward to the European Parliament's support in the process of conclusion of the agreement because the transatlantic partnership is not only of economic but also of a great geopolitical significance.

Together with the European Parliament we worked hard on other legislative initiatives that are important for competitiveness, growth and employment in Europe.

We are pleased that in the area of employment we brought up those issues which were put aside due to the economic and financial crisis, namely, sustainability and quality of jobs, adequacy of income, career opportunities and secure job transitions.

Here I would particularly like to mention the promotion of youth employment. We have reached an agreement to speed up the EU funding for the Youth Employment Initiative. Already this year, one billion euros will be available to the initiative to support up to 650,000 young people every year.

I would like to mention the new regulations, which will facilitate interoperability and safety of the trans-European railway system, to the benefit of both passengers and the industry.

The agreement on the trademark system reform will also promote and protect innovations. The new rules on package travels will provide better protection of consumer rights and clearer conditions for tour operators.

The agreements reached in the field of agriculture, health and other areas will also contribute to Europe's competitiveness and well-being of Europeans.

I am delighted that on June 25 the European Parliament, the European Commission and the Council launched negotiations on a new institutional agreement. This is a unique opportunity for the European Union institutions to improve the decision-making process. European citizens expect an effective and well-functioning European Union, and it is our common duty to ensure it.

The Latvian Presidency has worked purposefully and effectively to build competitive, digital, engaged and secure Europe.

We worked together with you, Martin, and you, Members of Parliament, as well as in close cooperation with the Commission and Jean-Claude.

I believe that our pragmatism has helped to lay a solid foundation for successful advancement of the issues during next presidencies.

With the sense of job well done, Latvia has handed over the management of the Council to Luxembourg. I wish them good luck and success.

We live in an increasingly dynamic and interrelated world. It will further lead to an increasing number of new opportunities and challenges.

Therefore, only our resolute and focused work to the benefit of European citizens will lead to a successful European Union.

Thank you for attention!