Designing a special and unique logo has become a tradition for every country holding the Presidency of the Council of the European Union. The logo tells a story for each country – a story that is rooted in individual history and traditions, but at the same time reaches towards the united future of the European Union.

The logo will be one of the most visible symbols of the Latvian Presidency. It will be used in documents, publications and presentations, souvenirs, and objects in different environments, including the digital one. The Latvian Presidency logo will also adorn the buildings of the Council of the EU in Brussels, event venues and brochures all around the world.

The logo for the Latvian presidency of the Council of the European Union is based on the classic image of the grinding stone. The circular stone has been known throughout Europe for centuries and is rich in associations. 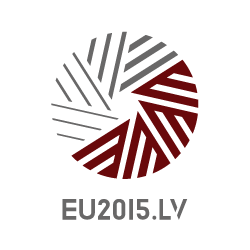 The grinding stone was once a significant innovation and a trigger of change in households across Europe. Today, it remains the instrument that brings about bread, the symbol of nourishment and prosperity. Made from stone, it can endure centuries of motion and still sustain productivity.

The circular shape of the grinding stone suggests unity and wholeness – the commonly held ideals and values upon which the European project is built.

The dynamic movement of the rotating grinding stone brings about the energy and growth with which Europe meets new challenges. With Latvia at the wheel, Europeans are certain to gain new perspectives.

Graphic designer Gunārs Lūsis is the author of the Latvian Presidency logo. He is best known as the “Father of the Latvian Lat”, as he designed the first coins used in Latvia after the country regained independence over twenty years ago.

Latvia joined the Eurozone last year and, as a full-fledged member of the EU family, will now begin its first Presidency of the Council of the European Union. It is therefore especially symbolic that Gunārs Lūsis designed the logo of the first Latvian Presidency – another fresh challenge.

Gunārs Lūsis has created around 70 well-known logotypes, including those of the Cultural Capital Foundation, the Opera Foundation, the Latvian Institute, “Riga 800” and many more. 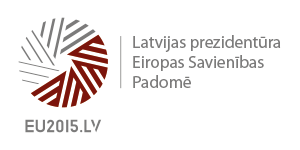 Please contact the Communication and Public Relations Department for information regarding use of the Presidency logo: