The continuity of work and effective use of resources are the two main reasons why the EU Council introduced the trio system under which three Member States take over the presidency one after the other and work closely together. Each country holding the presidency for six months works in accordance with the common trio work programme. 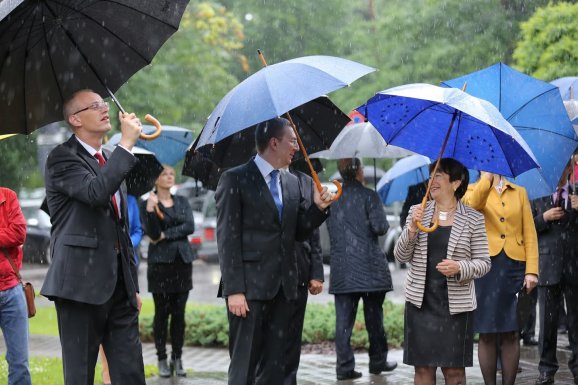 Opening of the Trio Presidency in Jūrmala, Latvia on 1 July 2014. (From left to right: Gatis Truksnis, Mayor of Jūrmala City, Latvia’s Foreign Minister Edgars Rinkēvičs and the Head of the European Commission Representation in Latvia Inna Šteinbuka)

From 1 July 2014 to 31 December 2015 the presidency trio is made up of Italy, Latvia and Luxembourg. All three Member States have worked together to develop the trio’s 18-month programme, identifying which areas and key issues the EU Council will work on during this period.

The programme consists of two parts. The first part is the strategic framework with long-term goals which will also be on the agenda for the next presidency trio (Netherlands-Slovakia-Malta). The second part sets out the issues on which Italy, Latvia and Luxembourg have focussed their activities.

The main objective of our presidency trio is to fully overcome the economic and financial crisis and to boost growth in the EU, to strengthen the EU's capacity to deliver more jobs and seize digital opportunities, to protect fundamental rights and to fully play its role in a fast-changing world.

Priorities of the Trio presidency:

The system of presidency trios was introduced in 2009 and the order of rotation of the Council presidencies has been decided until the first half of 2020. By then, all of the EU Member States except Croatia – the newest member – will have assumed the presidency at least once.

Every trio includes one of the newest Member States which joined the EU in 2004 or 2007. Size and geographical location are also taken into account so that all trio groups represent the diversity of the EU's Member States.

The Italy-Latvia-Luxembourg trio began its work during a period of change. The new European Parliament commenced its work in July 2014, followed at the end of 2014 by the new European Commission, High Representative of the Union for Foreign Affairs and Security Policy and President of the European Council.