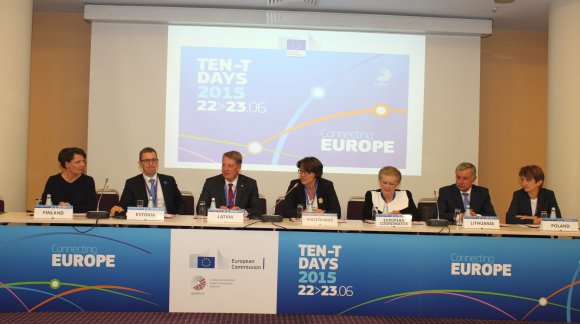 The main result of these TEN-T days was the signature of a declaration on the implementation of the Rail Baltic project, a key part of the North Sea Baltic Core Network Corridor, by the Ministers of Latvia, Lithuania, Estonia, Finland and Poland. Furthermore, Commissioner for Mobility and Transport Violeta Bulc and Ministers of the Western Balkan States agreed on the indicative extension of the Core network and the Corridors in the Western Balkan countries. The mandate of the Corridor Coordinators will consequently also be extended into the region.

Overall, the conference focused on the challenges of the new trans-European networks' policy to innovative financing solutions. The EU's target in infrastructure development is to close the gaps between Member States' transport networks, remove bottlenecks that still hamper the smooth functioning of the internal market and overcome technical barriers such as incompatible standards for railway traffic.

Violeta Bulc, EU Commissioner for Mobility and Transport said: "The time is now for us to join forces to turn the trans-European transport network into reality. The basis for our future progress is the implementation of the work plans, including key cross-border projects. I am counting on all actors – national and regional, public and private, to make the best use of our instruments such as Connecting Europe Facility and the new European Fund for Strategic Investments. In this respect, the recommendations made in the Christophersen – Bodewig – Secchi report play a vital role in attracting the necessary private investment."

Anrijs Matiss, Minister for Transport of Latvia commented: "I am pleased to welcome the TEN-T Days to Riga – a key event that takes place on the eve of the successful completion of Latvia’s historic first Presidency. I am delighted that innovative and cohesive infrastructure development and the means of its financing have received a prominent place in this high-level conference. Rail Baltica is an excellent example of such cohesive infrastructure. It shall not only connect the major Baltic cities via the European standard gauge – paving the way for new mobility solutions for passengers and freight – but also mark the symbolic reconnection of the Baltic region with the core of Europe. We are thus happy that the declaration on the Rail Baltic project has been successfully concluded by all the key stakeholders."

On the occasion of the conference, the Commission has also informed about the results of a study on the Core Network Corridors. Key findings show that the impact of EU investment in transport infrastructure is high: 1.8% of GDP growth and 10 million jobs will be created. These positive effects on the economy and the job market will last beyond the investment period up until 2030.

On 10 July 2015, the Connecting Europe Facility (CEF) Committee will vote on the projects selected for the allocation of funds. €11.9 billion of EU funding are available to improve European transport connections.

TEN-T Days 2015 were organised by the European Commission, in cooperation with the Latvian Presidency.