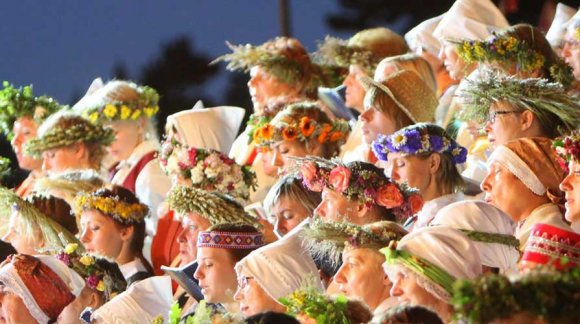 In honour of the first Latvian Presidency of the EU Council, the European Festival of Latvian Culture (ELKS) will take place in Brussels from 18 to 21 June, giving the city’s residents and guests the opportunity to enjoy Latvian singing and dancing traditions.

The aim of the Festival is to bring together people who are passionate about Latvian culture from all parts of the world. It will be a continuation of the song and dance festivals that for several decades were organised by Latvian communities in exile – the most extensive project undertaken by the Latvian diaspora community in Europe since 1989 when the last European Latvian Song Festival took place in Helsingborg, Sweden.

The Festival programme features flash mob events by choirs and dance groups in several EU institutions and across Brussels, theatre, poetry and chamber music performances, and a photo exhibition. The Latvian bands Astro’n’out and DAGAMBA will also take part in the Festival.

The culmination of ELKS will be the Grand Song and Dance Concert on Saturday 20 June at 18:00 on theAlbertina Square (Place de l’Albertine / Albertinaplein) in the centre of Brussels. It will be a magnificent performance with around 800 participants – singers, dancers, folklore groups and guest artists. The leitmotif of the Grand Concert programme is love. Each participant and spectator will be invited to remember and honour the nation's cultural treasures acquired over the centuries, as well as the treasures of the heart – love for human beings, Nature and the homeland.

The repertoire of the Grand Song and Dance Concert has been designed according to the traditions of the Latvian nationwide song and dance celebrations which, along with the Lithuanian and Estonian Song and Dance Festivals, are included in UNESCO's Intangible Cultural Heritage List. The united choir will perform Latvian folk songs, masterpieces by Latvian composers and contemporary compositions. In turn, the dance repertoire will include beloved Latvian traditional and stage dances, as well as contemporary choreography. The musical accompaniment will be provided by the band Raxtu Raxti and musicians from the Imants Ziedonis foundation Viegli.

Almost 40 collectives – choirs, dance and folklore groups – from 14 countries, including Latvia, will take part in the Festival. For the detailed programme, please visit the ELKS webpage www.elks2015.eu.

The Festival is organised by the European Latvian Association in cooperation with Latvian diaspora communities across Europe. It is supported by the Ministry of Foreign Affairs of the Republic of Latvia, the Secretariat of the Latvian Presidency of the EU Council and the government of the Brussels-Capital Region. The honorary patrons of the Festival are Vaira Vīķe-Freiberga, the former President of Latvia, and Valdis Dombrovskis, the Vice-President of the European Commission.

This summer, the song and dance festival tradition will also flourish in Latvia when, at the end of June, the 8th Nordic-Baltic Choral Festival will take place in Riga. The closing concert of this Festival will also conclude the Latvian Presidency public diplomacy and cultural programme.