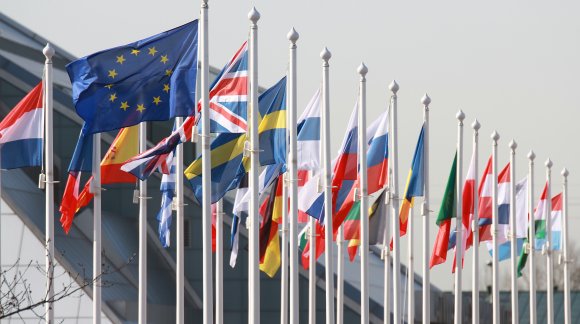 Following the EU's largest single enlargement in terms of number of states and population with the accession of 10 new countries in 2004, the European Neighbourhood Policy (ENP) was developed in order to facilitate the steady development of Member States and their neighbouring regions, and to strengthen political and economic ties. This cooperation platform currently consists of 16 countries.

The ENP is not just a bilateral policy between the EU and each partner country, but is also complemented by regional and multilateral cooperation initiatives and formats, such as the Euro-Mediterranean Partnership (with neighbours to the EU’s south in North Africa and the Middle East), the Black Sea Synergy (regional cooperation among the countries around the Black Sea) and the Eastern Partnership.

The Eastern Partnership is a joint policy initiative between the EU, its 28 Member States and six Eastern European neighbours – Armenia, Azerbaijan, Belarus, Georgia, Moldova and Ukraine. The Heads of State and Government agreed on its launch at the Prague Summit in May 2009.

The EaP offers Eastern neighbours that wish to move closer to the EU and enhance political, economic and cultural links the opportunity to do so. It is underpinned by a mutual commitment to international law and core values – democracy, justice and respect for human rights and fundamental freedoms (along with the market economy, sustainable development and good governance).

The EaP is one of the EU's most important foreign policy initiatives that is mutually beneficial to both individual states and the region as a whole. It does not pave the way for the countries’ accession to the EU, but is a voluntary initiative that provides greater opportunities for cooperation and development for those involved.

How does it work?

Gradual liberalisation of the visa regime, greater energy independence, trade facilitation, the implementation of joint projects and financial support for reforms are only some of the potential benefits for the EaP countries. For the EU, it means stability in neighbouring countries that are willing to cooperate, thus promoting overall regional development, security and stability and at the same time reducing social and economic disparities.

The EaP has two cooperation platforms:

The way forward – slowly but surely

Departing from different starting positions and with differing ambitions, six countries – Armenia, Azerbaijan, Belarus, Georgia, Moldova and Ukraine – set off together on the path towards closer cooperation with the EU in 2009. From the outset, some of them displayed an ambition to join the EU in the future, whereas others were more cautious. 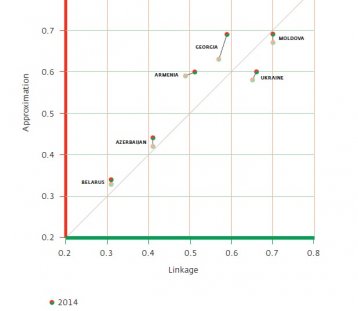 Over the years, all the EaP countries have shown different but positive results regarding integration with the EU (see graphic) through the strengthening of political, economic and social linkages, and legal and institutional approximation to EU standards.

Once every two years the EU and EaP political leaders meet at the Eastern Partnership Summit. The 4th Summit which will take place in Riga at the end of May will be one of the main events of the Latvian Presidency.

As one of the dimensions of the European Neighbourhood Policy (ENP), the Eastern Partnership has also been highlighted in the Latvian Presidency work programme as a priority that requires special attention. Determined work on the review of the ENP and the assessment of current results has been carried out during the Latvian Presidency.

The Riga Summit will serve as a strong signal of the EU’s long-term strategic support for the Neighbourhood Policy. The Summit plans to emphasise the need for the EU to adopt an even more flexible and inclusive approach in cooperation with the partner countries. It will be based on an individual and differentiated approach that takes into consideration the ambitions and capabilities of each country.

- The Eastern Partnership – a Component of the European Neighbourhood Policy

- Presentation on the Eastern Partnership (EEAS)