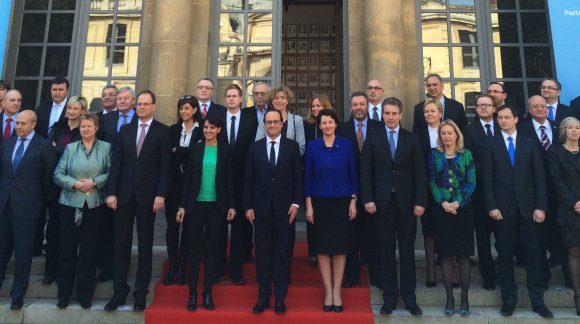 During the informal meeting in Paris on 17 March, which was honoured by the presence of the French President François Hollande, Education Ministers from the European Union Member States and Mr Tibor Navracsics, the Commissioner for Education, Culture, Youth and Sport adopted the Declaration on promoting citizenship and the common values of freedom, tolerance and non-discrimination through education.

The informal initiative brought together Education Ministers, State Secretaries and representatives from all the 28 EU Member States. Proposed by France and supported by the Latvian Presidency and the European Commission, the meeting was held in response to the tragic terror attacks in Paris, on 7 January and in Copenhagen on 14 February.

The declaration calls for Europe's combined efforts to prevent and tackle marginalisation, intolerance, racism and radicalisation and to preserve a framework of equal opportunities for all. "As ministers responsible for education, we have a special duty to ensure that the humanist and civic values we share are passed on to future generations," on behalf of the Presidency said Ms Mārīte Seile, the Latvian Minister for Education and Science.

"Even though education systems within the European Union are different, we must find ways to consolidate Europe's efforts in tackling intolerance, discrimination and radicalisation starting from an early age. Similarly as the European leaders joined millions of people marching in the streets of Paris, the education policy-makers must now stand shoulder to shoulder in support of the values at the heart of the European Union – freedom, tolerance, equality and rule of law," stressed the Minister.

The ministers talked about strengthening the key contribution which education makes to personal development, ensuring inclusive education for all children and young people and empowering teachers so that they are able to take an active stand against all forms of discrimination and racism. Importance to enhance social, civic and intercultural competences, critical thinking and media literacy was emphasised at the meeting. Similarly, the need to foster education of disadvantaged children and young people was also mentioned.

To reach these aims, European, national, regional and local level action is to be enforced. The main tool at the European level are the 'Education and Training 2020' strategic framework through its priorities, peer learning and the exchange of good practices. Furthermore, the Erasmus+ programme also has a great potential to contribute through the mobility of learners and teachers, strategic partnerships and education institutions cooperation platforms, as well as to dialogue and joint projects on citizenship education, volunteering and youth exchanges.