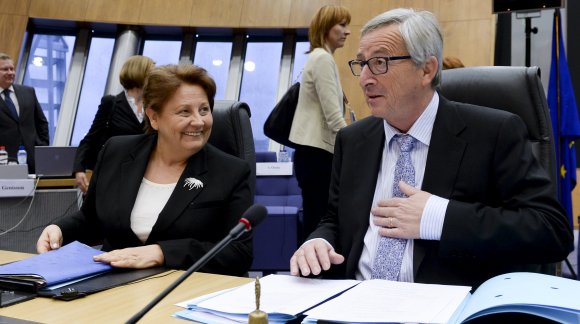 On Wednesday, December 3 in Brussels, during a bilateral meeting, Prime Minister Laimdota Straujuma and President of the EC Jean-Claude Juncker discussed the priorities of the presidency, as well as the action needed to ensure successful implementation of a new Investment Plan for Europe during the presidency, and in order the economies and residents of the EU countries would feel real benefits as soon as possible.

The two parties agreed to make every effort to ensure that the new Fund starts its activities as soon as possible.

L.Straujuma points out that a constructive discussion with the EU Member States and the European Parliament has to be ensured exactly during Latvia's Presidency in order to agree on the legal acts needed to put into practice the Investment Plan.

J.C. Juncker also stressed that the Investment Plan is a strategic mechanism alongside the cohesion policy of the EU. "The implementation of the Investment Plan provides for the development of the European Fund for Strategic Investments (EFSI) that will be guaranteed by the public sector funds in order to mobilize at least 315 billion euro of additional investment for next three years. The registration of the projects to be implemented will be provided by channelling investments to the areas where needed most. An overarching objective is to strengthen competitiveness of the EU on a global scale, incl. by ensuring as attractive investment environment as possible," says the President of the EC.

The President of the European Commission congratulated Prime Minister L.Straujuma for the Presidency's program developed by Latvia and the set priorities – competitive Europe and engaged Europe. L.Straujuma emphasized that the priorities are closely linked with energy policy that is one of the areas requiring larger amounts of investments. "Therefore, during the Presidency, considerable attention will be given to the development of the concept of the Energy Union. During the Presidency, particular importance will be attached to strengthening energy independence in order to complete the development of the internal energy market, incl. by focusing on the energy infrastructure problems. The agenda will also include energy security, by raising also discussions on the role of regional governance," says the Prime Minister.

The new European Fund for Strategic Investments (EFSI) will be developed in cooperation with the European Investment Bank (EIB). It will be based on 16 billion euro guarantee from the EU budget, including funding from the CEF (Connecting Europe Facility) and the Horizon 2020 programs and 5 billion euro, which will be allocated by the EIB, and which will serve as "seed money" – in the form of guarantees. The Member States are also encouraged to make their contribution to which the Stability and Growth Pact's flexibility will be applied. Based on historical experience of cautious estimates, the multiplier effect of the Fund will be 1:15 (euro).

During Latvia's Presidency, about 200 events are planned in Latvia, including high-level political meetings. One of the central events will be the Eastern Partnership Summit and related events (Business Forum, Civil Society Forum, the Media Freedom Conference and the Youth Forum, etc.), ten informal meetings of the EU ministers and the Asia-Europe Meeting of Ministers for Education (ASEMME). It is planned to organize the Digital Agenda Assembly in Latvia, the European Standardization Conference, and the Social Partners' Forum. In preparing for the presidency, 1,140 employees of public administration have been trained within a year and a half - they have thoroughly mastered the institutional framework of the European Union, negotiation skills, decision-making and drafting practice.