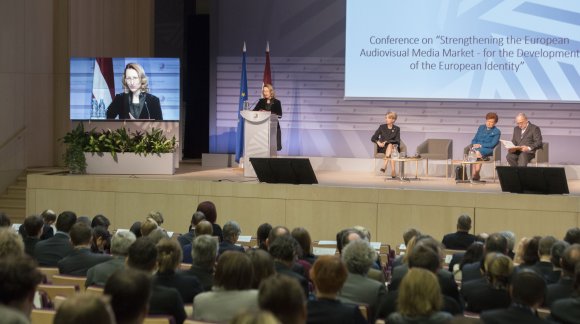 More than 200 media experts, regulators and policy makers from all 28 EU Member States exchanged experiences and opinions at the international conference on “Strengthening the European Audiovisual Media Market for the Development of the European Identity”on 9–10 March in Riga. There was general agreement among the experts that the EU Audiovisual Media Services Directive needs to be updated.

The Speaker of the Parliament of the Republic of Latvia Ms Ināra Mūrniece, the expresident of Latvia and the Chair (2011 – 2013) of the High-Level Group on Freedom and Pluralism of the Media in the European Union, Ms Vaira Vīķe-Freiberga, and the Minister for Culture of Latvia, Ms Dace Melbārde, reminded the conference that the biggest challenges facing the European audiovisual media market today lie not only in the technical advances of the 21st century, but also in the area of responsibility for media content. A common EU approach is required to overcome these.

“There is no doubt that media and information are powerful shapers of society’s views and lifestyle in that they influence the opinions, choices and actions of individuals. Through words, symbols and sounds they can, for example, promote humanity and solidarity by collecting donations to save the life of a child. The media can also, however, incite hatred and violence that achieves the opposite by taking away lives. The question of editorial responsibility for media content is therefore becoming an increasingly critical issue. To further develop our shared audiovisual environment, we need common action to protect both the safety of the European information space and Europe’s shared values,” said the Minister for Culture of Latvia Ms Dace Melbārde at the conference.

The conference agenda focused on Member States’ experiences in implementing the Audiovisual Media Services Directive – the current challenges and suggestions on how to feed these into the European Commission’s evaluation of the directive. The EU Member State delegates agreed on the need to improve media literacy and the protection of minors in the European information space and to strengthen the role of media regulators in monitoring media content and implementing the country of origin principle. There are, for example, some television channels under the jurisdiction of one Member State which are without doubt targeting the audiences of other Member States with content hostile to those States.

Working groups discussed possible improvements in media regulation and new effective models for implementing them. The European Commission representative, the Head of the Converging Media and Content Unit at DG Connect, Ms Lorena Boix Alonso, stressed the importance of sharing examples of best practice in the implementation of media regulations with the European Commission, as these examples can be very useful for the review of the Audiovisual Media Services Directive.

One of the priorities of the Latvian Presidency of the Council of the European Union is Digital Europe, with its aim of facilitating initial discussions on the Digital Single Market strategy. Its objectives are to eliminate online borders, build trust and confidence in the media, remove restrictions, ensure access and connectivity, and build a single digital economy.

The conference was organised by the Ministry of Culture of the Republic of Latvia and the National Electronic Mass Media Council of Latvia, supported and co-funded by the European Commission. This is one of three international conferences organised by the Ministry of Culture under the Latvian Presidency as part of the Annual Creativity Action Week radi!2015 (create!2015) in Latvia.