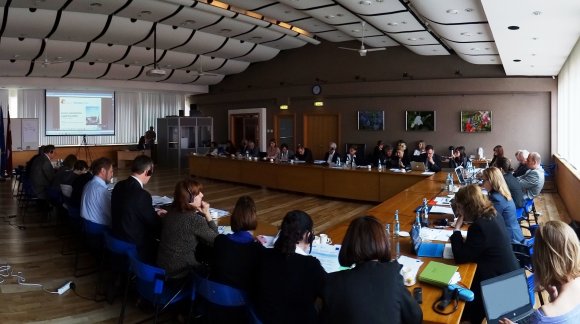 On 25-26 June in Riga, the Latvian Presidency of the Council of the European Union together with the European Commission met with the Eastern Partnership countries, to reach a consensus in international climate change negotiations and to promote conclusion of the new international agreement in December 2015, in Paris.

The seminar was attended by the representatives from Armenia, Azerbaijan, Belarus, Georgia, Moldova, Ukraine, as well as representatives from the Latvian Ministry of Environmental Protection and Regional Development and the European Commission (EC) Directorate-General for Climate Action.

Participants discussed the progress made in climate change negotiations so far, exchanged views and worked towards a common vision on main conditions for a comprehensive global legally binding agreement on a new climate change regime after 2020 to be concluded at the Session of the Conference of the Parties to the United Nations Framework Convention on Climate Change (COP21) in the end of 2015. Among the issues discussed were the main elements of the agreement, its legal form, commitments and other relevant issues. The participants also discussed each country's progress of the national contribution to the Intended Nationally Determined Contributions (INDC) to reduce emissions. The EU's INDC was approved on 6 May 2015, thus becoming the first major economy who has reached this target.

In parallel to the seminar, the Latvian Presidency met with each of the countries in bilateral negotiations. During these talks the national priorities of each country and experience in climate policy were discussed and the potential areas for strengthening cooperation and possible extension of the existing cooperation between the EU and Latvia were identified.

This event was significant for the Latvian Presidency in the context of international climate negotiations and in the context of Latvian foreign policy, regarding implementation of the European Neighbourhood Policy, including cooperation with the Eastern Partnership countries.