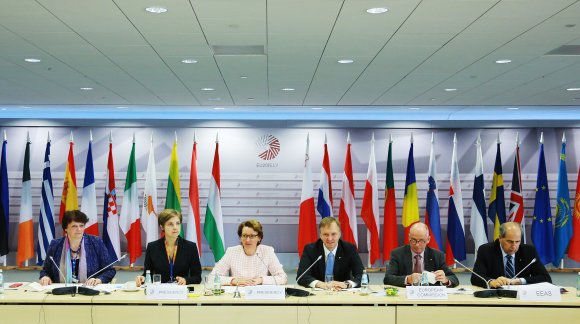 The meeting brought together representatives from Kazakhstan, Kyrgyzstan, Tajikistan, Turkmenistan, Uzbekistan, Poland, the United Kingdom, Estonia, Spain and Sweden, and the European Commission Directorate-General for International Cooperation and Development and the European External Action Service.

The Ministers and high-level officials endorsed a Joint Communique on cooperation in higher education and vocational education and training, and adopted the Indicative Roadmap of Activities for the next two years. Main issues in the EU-Central Asian education cooperation, the implementation of the EU-financed Central Asian Education Platform and the EU Erasmus+ programme were discussed during the meeting.

"A country is as competitive as each one of its citizens. Kazakhstan, Kyrgyzstan, Tajikistan, Turkmenistan and Uzbekistan have all gone through major education reforms while sharpening their competitiveness and bringing the world of education closer to the world of work. The EU has been glad to assist in this transformation process, and the Presidency has given a new impetus to this cooperation," said Ms Mārīte Seile, the Latvian Minister for Education and Science.

When opening the meeting, the Minister outlined the EU and global tendencies in higher education and professional education and training, and shared Latvia's experience.

During the meeting, the State Secretary at the Latvian Ministry of Foreign Affairs, Mr Andrejs Pildegovičs, informed on the progress achieved in the EU-Central Asian relations, as it has been among the core priorities of the Latvian Presidency of the Council of the EU. The State Secretary also welcomed the conclusions on the EU Strategy for Central Asia adopted at the Foreign Affairs Council meeting this week. The conclusions also highlight education as a field of cooperation. Education is strategically important for the economic growth and social development, and the EU support in education is highly appreciated.

The participants also attended Latvian higher education and vocational education and training institutions, including the Riga Graduate School of Law, which offers a three-month-long programme entitled "Advanced Programme in Law and Economics" to diplomats, high-level officials and civil society activists from Central Asia and the Eastern Partnership countries. The Ministers also acknowledged the readiness of Poland to assume the leading role for higher education and of Latvia – for vocational education and training under the Central Asian Education Platform (2015-2018).

The Latvian Presidency's audiovisual database includes a photo gallery containing print-quality digital pictures and a video gallery where all video files are available in high and standard definition resolutions. All pictures and video files can be downloaded and used free of charge provided that the source is duly credited. The source of the material should be indicated as EU2015.LV.