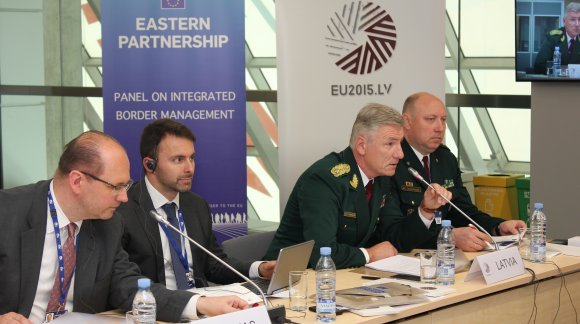 At the opening of the meeting the Chief of the State Border Guard General Normunds Garbars stressed that Latvia has defined Eastern Partnership as a priority of the Latvian Presidency of the Council of the EU and welcomed the willingness of the Eastern Partnership member states to implement in their respective countries the highest standards of the Integrated Border Management, as well as expressed his gratitude of existing cooperation and wished strength and perseverance towards closer cooperation with the aim to combat trans-border crime and to ensure national security of the countries.

During the meeting participants discussed issues related to situation in Integrated Border Management in Eastern Partnership countries, best practice in the implementation of this system in EU Member States, progress of various projects in the Eastern Partnership countries, and further joint activities to achieve established goals.
A visit to Riga Passenger terminal and Riga Commercial Port was also organised as part of the meeting programme. Latvian State Border Guard and Customs officials introduced the participants with various aspects of operations of ports as well as demonstrated what latest technical equipment is able to offer.