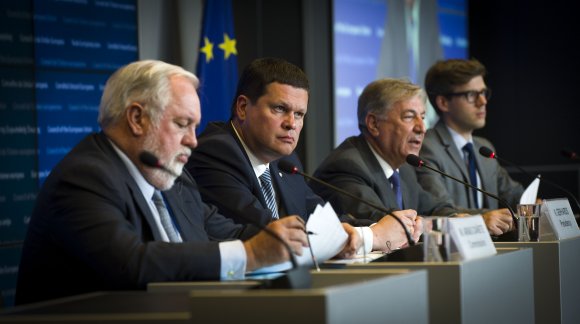 On Monday, 15 June, the Minister for Minister for Environmental Protection Kaspars Gerhards chaired the meeting of the EU Environment Council (ENVI) in Luxembourg. During the meeting the EU Member States discussed legislation on air quality, climate change and other issues.

The Council held a policy debate on the proposal for a directive on the reduction of national emissions of certain atmospheric pollutants (NEC directive). Its aim is to achieve a significant improvement in air quality in the EU.

The directive is part of the "Clean Air Programme for Europe". It seeks to address various health risks and environmental effects caused by air pollution, and will ensure that EU law is fully in line with new international commitments by 2020.

Ministers had an opportunity to express their views on outstanding issues and to discuss how to make progress towards reaching a common position.

The Council took stock of progress in the international climate negotiations as part of the preparations for the UN Convention on Climate Change conference in Paris in December 2015 (COP21). Ministers assessed progress achieved in both latest negotiating sessions, Geneva (8 to 13 February) and Bonn (1 to 11 June).

Ministers expressed concerns about the slow pace of negotiations and noted that currently only 10 negotiating days remain until the COP21. Recalling the significance of Intended Nationally Determined Contributions (INDC), ministers welcomed Parties that have already communicated their INDC and urged others to follow and to communicate their INDC well in advance of the Paris Conference.

Recognizing the importance of ambition and durability of commitments, the Council expects the Conference to adopt a legally binding agreement applicable to all Parties and compatible with the below 2˚C objective and the related COP decisions. The Council s debate will contribute to the development of the EU's position in the run-up to the Climate Change conference in Paris. It is expected that Council Conclusions on international climate change negotiations shall be adopted on 18 September 2015.

Minister Kaspars Gerhards acknowledged that "the European Union is committed to reaching an ambitious agreement in Paris, but cannot succeed alone". He called upon all Parties to strongly engage in negotiations and explore all possibilities for convergences.