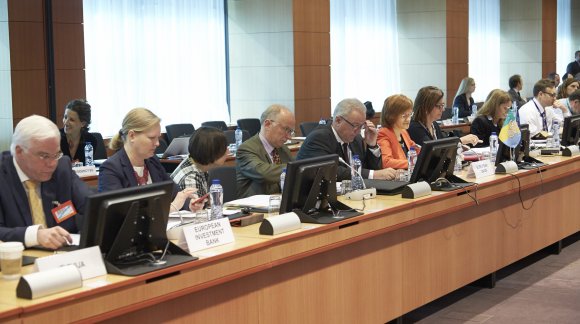 In their annual meeting on 28-29 May 2015, EU and ACP ministers focused their discussions on the post-2015 sustainable development agenda, in particular financing for development and climate change.

They undertook to work together towards the preparation of  the global discussions on these issues in Addis Ababa, New York and Paris later this year.

Following the recent tragic events in the Mediterranean, they also exchanged views on the issue of migration and development. They condemned the networks which organise human trafficking with complete disregard for human lives and called for urgent action to combat such networks. They also endorsed recommendations on trafficking and smuggling of migrants.

"I am very pleased by the open, substantive and constructive discussions that we had with our partners from the ACP countries. Our exchanges of view on a number of key issues such as the post-2015 development agenda and migration once again underlined the importance of our partnership," said Zanda Kalniņa-Lukaševica, Latvian Parliamentary State Secretary for EU Affairs.

The Council had an exchange of views on the future of private sector development in ACP countries.

Ministers also discussed several trade-related issues, in particular the state-of-play of the Economic Partnership Agreements, the impact of TTIP on ACP countries, as well as specific commodities issues of particular relevance to ACP countries.

They had an exchange of views on the European Year for Development and on Climate Change in view of the Conference to be held in Paris later this year.