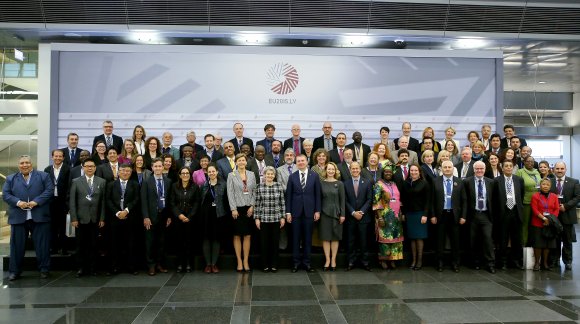 One of the largest global events organised by the United Nations Educational, Scientific and Cultural Organisation (UNESCO) – a conference devoted to the World Press Freedom Day, with a side event for the Russian-speaking media and the ceremony of the presentation of UNESCO/Guillermo Cano World Press Freedom Prize was concluded today, 4 May in Riga.

At the closing ceremony, Finland was announced as the host of the next World Press Freedom Day in 2016. The conference also adopted the Riga Declaration, highlighting the significance of the media and gender equality in ensuring sustainable development.

At the closing ceremony, Baiba Braže, Head of the Security Policy and International Organisations Directorate at the Ministry of Foreign Affairs, congratulated the Ambassador of Finland to Latvia, Olli Kantanen, and wished him a successful continuation of the tradition. The Finnish Helsingin Sanomat Foundation is the principal sponsor of the World Press Freedom Prize.

The conference addressed challenges to freedom of speech in the digital age, quality investigative journalism, safety of journalists, the role of women in media, and the media and information literacy. An opinion was repeatedly voiced at the event that media freedom and the observance of human rights is the basis for free and democratic societies, economic growth, lasting peace and sustainable development.

Mazen Darwish, Syrian journalist and human rights activist, was chosen as the winner of this year's World Press Freedom Prize. Yara Bader, Director of the Syrian Centre for Media and Freedom of Expression (CMFE) and wife of Mazen Darwish, accepted the prize on behalf of her husband, who has been in jail since February 2012.

In parallel to professional journalists who covered the conference, a Youth Newsroom was also operational under the guidance of Vita Dreijere (University of Latvia). More than 30 young people from across the globe prepared two newsletters in print, each 12 pages long, reflecting the World Press Freedom Day events. The newsletters are available here: Avviso No.1 and Avviso No.2. The participants could also read a brochure in English featuring 10+1 interesting stories about the history of freedom of the press in Latvia. The author of the idea for the brochure and its editor is Vita Zelče, a Professor at the University of Latvia.

This year's World Press Freedom Day events took place on the same day when the Republic of Latvia marks the 25th anniversary of its restoration of independence; and UNESCO — its 70th anniversary; moreover Latvia currently holds the Presidency of the Council of the European Union. Marking the World Press Freedom Day celebration, Latvijas Pasts, the postal service of Latvia, has issued a special "Freedom of Speech" stamp, which was presented to Irina Bokova, UNESCO's Director General.

The Ministry of Foreign Affairs offers special thanks to its cooperation partners at UNESCO (both the Secretariat in Paris and the Latvian National Commission for UNESCO), the Stockholm School of Economics in Riga, the University of Latvia, the Latvian Journalists Association, the Embassy of Sweden in Riga, the President's Chancery, the Embassies of Switzerland and the United States, and the Nordic Information Office for their contributions to successful organisation of the World Press Freedom Day in Riga.

The World Press Freedom Day 2015 in Riga from 2 to 4 May was organised by UNESCO in association with the Ministry of Foreign Affairs. The events brought together more than 500 participants from 81 countries.