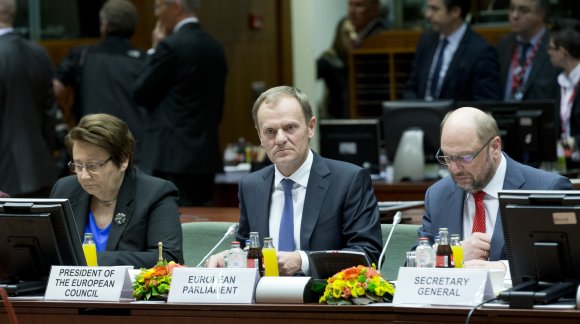 On 20 March, the second day of the European Council meeting in Brussels, Latvian Prime Minister Laimdota Straujuma invited the EU Heads of State and Government to attend the Eastern Partnership Summit in Riga on 21-22 May.

Straujuma emphasised that the Riga Summit will serve as a signal that the European Union is pursuing its efforts to develop closer cooperation with the Eastern Partnership (EaP) countries in line with expectations, achievements and the pace of reforms in each country.

Continuing the discussions that began the day before, the EU Heads of State and Government focussed on growth in Europe and economic development issues. Laimdota Straujuma noted that the Latvian Presidency had held discussions on the Annual Growth Survey during the period preceding the European Council meeting. This survey looks at reforms and activities for improving the business environment that need to be implemented in each EU Member State in order to promote economic growth.

During the European Council, the further implementation of structural reforms was approved, as was the need to modernise public administration.

The EU Heads of State and Government reaffirmed their support for the European Commission to push on with negotiations with the US Government on the Transatlantic Trade and Investment Partnership (TTIP) with a view to concluding the process in December this year.

Turning to the situation in Greece, it was reiterated that Greece had to submit a list of reforms in the very near future, and had to comply with the conditions and action plan set by the Eurogroup and approved by Greece on 20 February.

The EU Heads of State and Government expressed serious concerns about the current situation in Libya and called on all parties involved in the conflict to agree to an immediate cease-fire, the launch of a political dialogue and the formation of a national unity government. Latvia stood with the EU in pledging support for the implementation of the agreement reached.

The European Council condemned the acts of terrorism committed this week in Tunisia and expressed its deepest condolences to all the families of the victims. The Heads of State and Government decided to strengthen EU cooperation with Tunisia by working together on combatting terrorism and by expanding relations in the fields of strengthening democracy, the economy and social affairs.