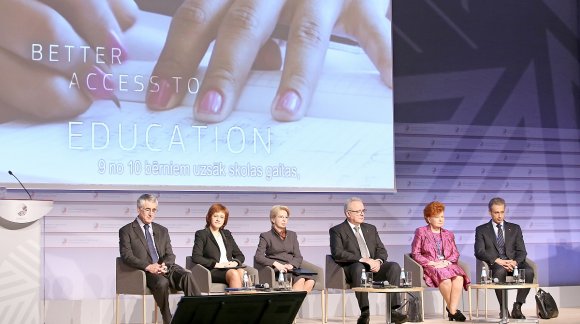 Zanda Kalniņa-Lukaševica also emphasised that we must move from political statements to tangible solutions and noted that investments in gender equality translate into economic growth for a country. According to UN forecasts, if women were ensured as many jobs as men, the GDP in developing countries would increase by 15%. Equal access for women to land and micro credits would lead to a 20%  increase in the total GDP of countries in Africa.

There was a general agreement among the participants that more funds ought to be invested in women's economic empowerment. Access to education and freedom of choice in family planning are vital prerequisites for women's full engagement in economic and political processes. A particular focus was placed on the role of the private sector – in job creation and training that enables women to establish businesses.

It was also acknowledged that gender equality is a universal problem, of importance both for developing countries and the European Union. The outputs of the conference will be used in further EU and UN talks on the new sustainable development goals that should be approved this autumn.

The conference brought together 260 participants from more than 40 countries, representing the EU institutions, international organisations including the UN, the OECD, the International Labour Organisation, the World Bank, as well as the private sector and NGOs. The event was organised by the Latvian Ministry of Foreign Affairs in association with the European Commission.

The month of March in the European Year for Development is dedicated to the rights of women and girls. A broad debate will take place on how important it is to ensure equal rights to access to education, equal rights to jobs, fair wages, the rights to property and inheritance, and social guarantees.

Gender equality and the rights of women and girls are also main priorities for the Latvian Presidency in the development cooperation policy. See further information on the website of the European Year for Development.