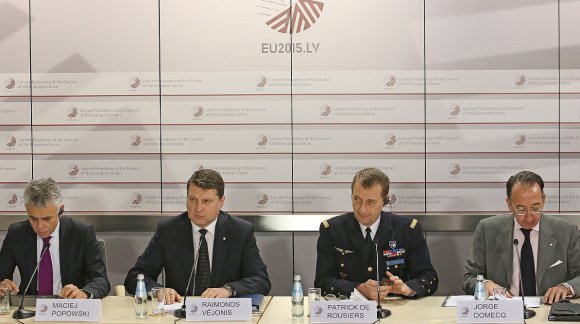 On 18-19 February the EU Defence Ministers called for unity to be maintained in the face of a series of crises affecting European security. During their informal meeting, Ministers emphasised that a revision of the European Security Strategy should be one of the main topics on the agenda for the June 2015 European Council discussion on security and defence.

The Ministers agreed that it is important to ensure that the Heads of State and Government debate the strategic security challenges and the EU’s response to them, with the objective of revising the European Security Strategy.

"The European Council on security and defence in June will be a crucial event in further advancing defence cooperation among the EU Member States" said the High Representative of the Union for Foreign Affairs and Security Policy and Vice-President of the European Commission, Federica Mogherini. "In the current security environment in which we are faced with new and complex threats, unity is required more than ever."

“Strategic communication is one element that plays a critical role in countering hybrid threats. We have come to an agreement that a comprehensive communication plan should be developed to help build consensus both internally and externally and to protect our citizens,” stressed Raimonds Vējonis, the Minister for Defence of the Republic of Latvia.

The defence industry plays an important role in both economic and strategic terms. “We have a strong commitment to the EU as a provider of security, and in order to fulfil that role we need strong defence capabilities backed by a strong defence industry,” emphasised Jorge Domecq, the Chief Executive of the European Defence Agency, pointing out the need to strengthen the field of research and development.

The Defence Ministers discussed the positive results of the ongoing EU military missions and operations, as well as enhancement of the EU's rapid response capabilities. In this regard, the Ministers stressed the need for closer EU-NATO cooperation, thus ensuring that both organisations complement one another and enhance security in Europe.