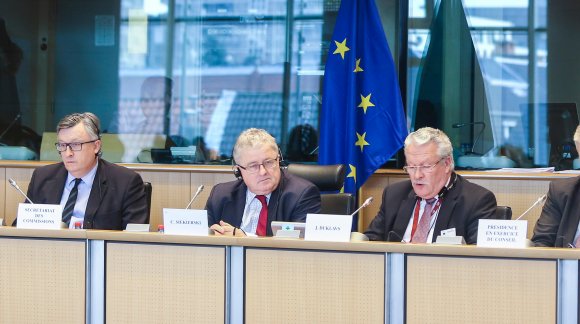 On Wednesday 21 January, the Minister for Agriculture, Jānis Dūklavs presented priorities of the Latvian EU Council Presidency to the Committee on Agricultural and Rural Development of the European Parliament, in Brussels.

The minister said: "The Latvian Presidency will promote measures aimed at making the European agriculture more competitive in global markets. European agricultural products are among the most qualitative in the world, and they must remain so in the future. This has to be taken into consideration when the EU revises rules in this area. Ensuring balanced monitoring of agricultural and food production and reducing red tape for farmers at the same time are among the key priorities of our Presidency."

The Minister also addressed the issues of organic farming, animal and plant health, simplification of the Common Agricultural Policy (CAP), and the challenges that the farming and food sectors are currently facing.

A particular attention will be devoted to simplification of CAP. During its Presidency, Latvia will work on providing clear signals to the Commission on rural development, direct payments and common market organization where simplification is extremely important.

In organic agriculture the main task of the Presidency is reaching an agreement between the member states so that the negotiations with the Parliament can start.

The Presidency will monitor the developments regarding Russia's embargo closely, and take the appropriate steps as necessary. It will consistently follow the situation in the milk sector, including the impact of Russia's embargo. This will allow assessing whether further political action is needed, in addition to the enforced measures.