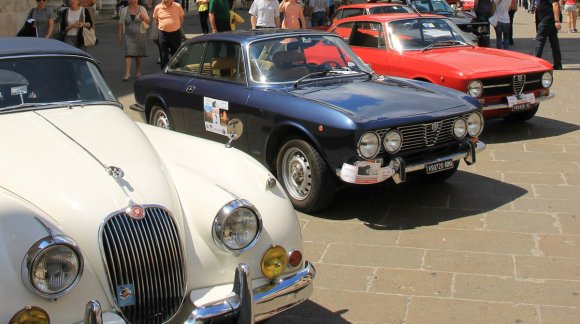 On Friday 26 June, Riga Town Hall Square will host a parade of 20 elegant Italian, German and British historic cars that have taken part in the Amber Trophy touring rally.

The Amber Trophy photo orientation tour started on 21 June in the picturesque Veneto region in Italy. Its route follows the ancient Amber Road which once connected the Baltic Sea coast to the Roman Empire. The participants will have covered 2200 kilometres in six days, crossing Austria, the Czech Republic, Poland and Lithuania to arrive at their final destination – Riga.

Around 20 historic cars manufactured between 1950 and 1970 will arrive in the Latvian capital. Residents and guests of Riga will have the opportunity to admire the sporty Alfa Romeo 2000 Touring Spider, the Maserati Marek 3000 SS, the Lancia Coupe 1.3 Monte Carlo, the chic Jaguar XK 150 3.4 DHC and the Lancia Flaminia Zagato, along with other exclusive historic cars. The cars will be displayed on the Town Hall Square from 13:30 to 15:00.

During their stay in Riga, the tour participants will visit the city's main attractions and attend several cultural events, including the 8th Nordic – Baltic Choral Festival that concludes the Latvian Presidency cultural programme.

The Amber Trophy touring rally has been organised by Italian historic car enthusiasts with support from Venice City Council in cooperation with the Riga Motor Museum, the Latvian Antique Automobile Club and the Secretariat of the Latvian Presidency of the Council of the European Union.