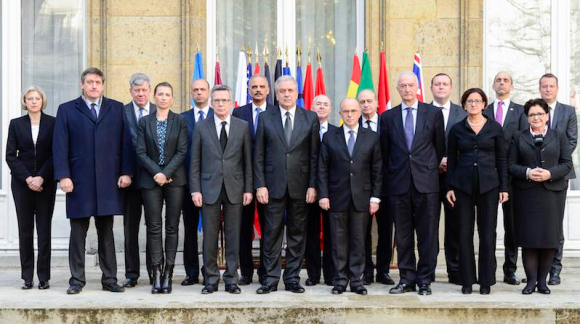 The Minister for the Interior of Latvia Rihards Kozlovskis represented the EU Council Presidency in an international Ministerial meeting in Paris on January 11.

“I strongly believe that this is the moment for us to have a joint and coherent reaction on terrorism. Fight against all forms of expression of the terrorism is high on my agenda and Latvia as the current Presidency of the Council of the EU will definitely draw specific attention to this issue,” said Kozlovskis.

Reacting to the calls from ministers to have a rapid and common response at EU level, during the meeting Kozlovskis proposed to call an extraordinary Justice and Home Affairs Council meeting in Brussels next week. If and when such a meeting is convened, will be decided after further consultations between the Presidency and Member States in the coming days.

Minister Kozlovskis also invited participants to discuss further steps needed in combating terrorism during the next informal Justice and Home Affairs meeting on January 29, in Riga.

Kozlovskis stressed that the current priorities are addressing the foreign fighters phenomenon, countering radicalization, strengthening the cooperation and exchange of information between the competent authorities and improving strategic communication. Minister mentioned the particular need for PNR data to counter and prevent the terrorism. He is committed to start negotiation on this file with EP as soon as their position is ready. EU should look into possibilities to improve security on external borders in order to more extensively detect and monitor certain passengers based on objective, concrete risk criteria which respect smooth border crossings, fundamental liberties and security requirements.

Kozlovskis invited participants to discuss further steps and possible additional measures to ensure proper response to violence caused by all forms of terrorism. The minister stressed that it is of crucial importance to demonstrate that we all stand united with France to respond to these awful crimes and threats to internal security of the EU.

Participants of the meeting also agreed on a joint declaration of the international Ministerial meeting in Paris on combating terrorism.

Photos from the Ministerial meeting

Joint statement of the ministers for the interior and/or justice of the European Union PDF, 0.1MB
Contact
Jānis Bērziņš
Spokesperson
Daiga Holma
Communications and media adviser to the Minister for the Interior
+371 29723599
daiga.holma@iem.gov.lv