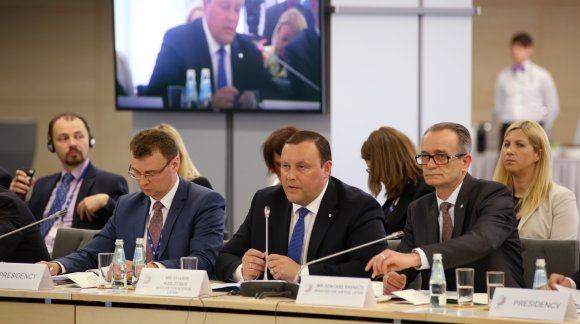 On 3 June, the EU-US Justice and Home Affairs Ministerial Meeting took place in Riga. It brought together representatives from the European Commission, the Unites States, the Latvian and incoming Luxembourg Presidency, Eurojust, Frontex and Europol. At the end of the meeting, the representatives reached an agreement on the Riga Statement on Enhancing transatlantic cooperation in the area of Freedom, Security and Justice.

Latvian Minister for the Interior Mr Rihards Kozlovskis said: "I would like to underline that adoption of the Riga Statement is a strong political message that we, the European Union and the United States, stand firm in the defence of our values, objectives and interests. I would like to underline the importance of this comprehensive document because it demonstrates that cooperation in Justice and Home Affairs covers almost the same policies as our own in the EU."

Latvian Minister for Justice Dzintars Rasnačs stressed: "I would like to emphasise the importance of this meeting - our close collaboration and sincere dialogue is the basis for mutual cooperation. As a result of our cooperation the Riga Statement is adopted. Considering the geopolitical issues, this meeting was also an important step forward for the strengthening of our cooperation in the area of Justice and Home Affairs."

Among issues to be discussed, special attention was devoted to migratory pressure and possible cooperation between the EU and US, in particular on the fight against smuggling of migrants. Joint measures countering terrorism and preventing radicalisation was considered, especially, in the light of the tragic events in Paris at the beginning of the year. Efforts and initiatives in the field of cybercrime also were discussed. In the area of justice, progress regarding the EU and US so-called Data Protection Umbrella Agreement and so-called Safe Harbour Framework was discussed. Attention was also be paid to the improvement of efficiency of judicial cooperation in criminal and civil matters.

The meeting was attended by the Latvian Minister for the interior, Mr Rihards Kozlovskis, the Latvian Minister for Justice, Mr Dzintars Rasnačs, the Commissioner for Migration, Home Affairs and Citizenship, Mr Dimitris Avramopoulos, the Commissioner for Justice, Consumers and Gender Equality, Ms Vĕra Jourová, the Attorney General of the US Department of Justice, Ms Loretta Lynch, and the Deputy Secretary of the US Department of Homeland Security, Mr Alejandro Mayorkas.

The EU-US Justice and Home Affairs Ministerial Meetings take place twice a year, alternately in the country holding the presidency of the Council of the EU or the US. The next ministerial meeting will take place in Washington under the Luxembourg Presidency.