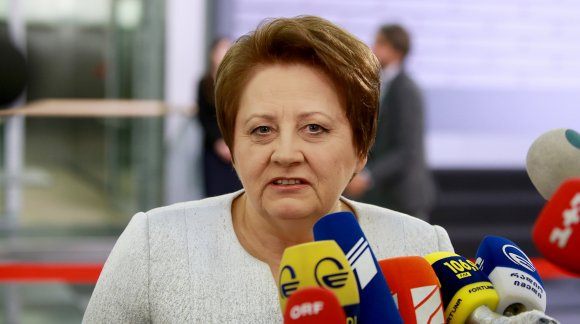 Today, the 4th Eastern Partnership (EaP) Summit – a high-level meeting of the Heads of State and Government of the EU countries and six partner countries organised within the framework of the Latvian Presidency of the Council of the European Union – ended in Riga with the adoption of the Summit Declaration.

This envisages ever closer cooperation between the EU and Armenia, Azerbaijan, Belarus, Georgia, Moldova and Ukraine. Prime Minister Laimdota Straujuma emphasised, that "the Riga Summit demonstrated the EU's willingness and readiness to further develop strategically important relations with the Eastern Partnership countries".

Prime Minister Straujuma drew attention to the fact that "the EU Member States are establishing a dialogue with each of the Eastern Partnership countries with the utmost seriousness, taking into account each country's specific characteristics and declared desires for cooperation with the EU".

The Prime Minister welcomes the Riga Summit Declaration, which emphasises that the EU remains committed in its support for the territorial integrity, independence and sovereignty of all Eastern Partnership countries.

In addition to the framework of political relations, the promotion of economic, commercial and human contacts and cooperation is, according to the Prime Minister, another very important factor. "The Riga Summit is definitely to be viewed as an important event on the Latvian and European event map. I am convinced that the issues we have discussed today at the Summit will mark the direction of EaP policy development for the years to come, by promoting stability, security, prosperity and democracy in the EaP region.

The Prime Minister welcomed the visa-free regime with one of the partner countries – Moldova – and congratulated Georgia and Ukraine on their active work to comply with requirements so that the Commission can deliver a positive assessment by the end of the year and then decide on a visa-free regime.

The Head of the Latvian Government stressed that "over these past few days Rīga, the capital city of Latvia, has hosted not only the Heads of State and Government of the EU countries but also representatives of NGOs and civil society from the Eastern Partnership countries, the media community and businesses. All these people-to-people contacts over three days of discussions and multi-level negotiations make a huge contribution to the future of the citizens of the European and Eastern Partnership countries and to their well-being".

Laimdota Straujuma affirmed that "the Riga Summit clearly demonstrated that we are moving towards ever increasing mobility, the promotion of reforms and human contacts, the strengthening of institutions and good governance, economic cooperation and the development of regional infrastructure. The importance of the Association Agreements in the further reform process with Georgia, Moldova and Ukraine, the agreement on a new framework for a bilateral agreement with Armenia, the work on a new deeper agreement with Azerbaijan and the activation of relations with Belarus all confirm that we are making sound and rapid progress in our cooperation with these countries".

At the conclusion of the press conference Prime Minister Straujuma said, "Since the Vilnius Summit, significant progress has been made in both bilateral and multilateral cooperation. Today, 22 May 2015, at the close of the Riga Summit, all of us – the EU and the Eastern Partnership countries – have a new opportunity to create the conditions for a better life for our citizens. We have built a collaborative bridge that enhances mutual understanding, unites people and promotes growth."