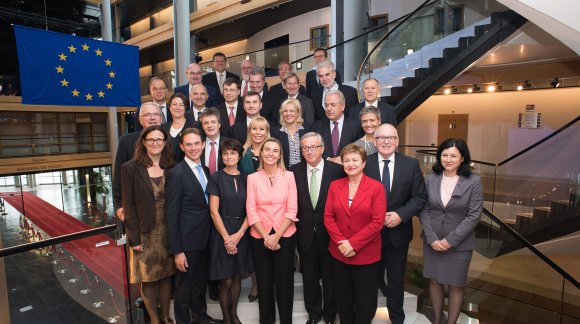 On 7-8 January, the College of Commissioners will travel to Riga for its traditional visit to the incoming Presidency of the Council of the European Union. The rotating Presidency will be held by Latvia for the first time, from January until June 2015.

The College of Commissioners and the Latvian government will discuss the priorities of the Latvian Presidency during a plenary session as well as in several "cluster debates" (see Annex). Vice-Presidents and Commissioners will have bilateral meetings with Ministers and also engage in a dialogue with key stakeholders and Members of the Saeima, the Latvian Parliament. On 9 January, President Jean-Claude Juncker and the Latvian Prime Minister Laimdota Straujuma will also kick-off the European Year for Development 2015 which will focus on setting a new course to ending poverty, promoting development and combating climate change for a sustainable post-2015 world.

Commission President Jean-Claude Juncker said ahead of the visit: "A new year starts with a new Presidency of the EU ready to deliver results that matter to citizens. Latvia is holding for the first time the Presidency of the EU and I have been impressed by the preparations and the level of ambition I have seen so far. I look forward to discussing with our Latvian colleagues and friends in Riga how we can swiftly turn ambitions into action: boosting Europe's competitiveness by improving the investment climate, delivering a borderless digital Europe and a strong European energy union, are our joint priorities. By working together, we will deliver."

"I will have the pleasure to welcome the President of the Commission Mr. Jean-Claude Juncker and all the Commissioners in Latvia. This symbolic and at the same time content wise important visit, will mark the beginning of Latvia's presidency of the Council of the EU. There is an ambitious and for Europe very necessary work period ahead for both – Latvia's government and for the Juncker team. Our presidency's priorities – competitive Europe, digital Europe and engaged Europe – will be a guiding light for our work in the coming six months", said the Prime Minister of Latvia, Laimdota Straujuma.

The EU's 28 Member States take in turn the chair of the rotating Presidency of the Council of the EU for a period of six months each. During this period, the Presidency chairs meetings at many levels, proposes guidelines and draws up compromises. More information is available here.