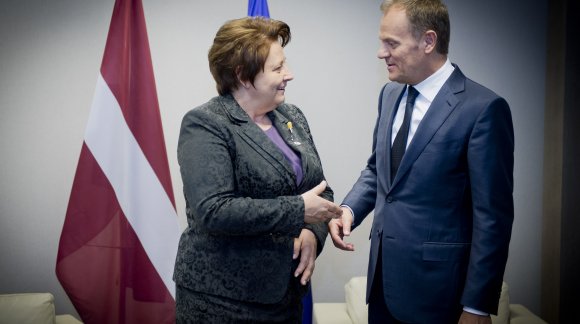 During the meeting with the President of the European Council, Donald Tusk, in Brussels today, Prime Minister Laimdota Straujuma noted that today's European Council presents an opportunity to act quickly and effectively, reinforcing the approach discussed during Monday's joint meeting of EU Foreign and Interior Ministers in Luxembourg.

The Prime Minister said that the Latvian Presidency is ready to draw up the road map for implementing the decisions that will be adopted by the EU Heads of State and Government at the European Council today. Donald Tusk commended the Latvian Presidency, the Latvian Interior Minister and the EU High Representative for being able to convene the meeting of interior and foreign ministers at such short notice to prepare for this special European Council.

Laimdota Straujuma confirmed that Latvia is ready to make its contribution to solving the EU's migration problems, especially by providing expertise and technical support. The Latvian Presidency will start work on the European Agenda on Migration immediately after it has been unveiled by the European Commission in May of this year.

The meeting also focused on the EU's Eastern Partnership Summit that will take place in Riga on 21-22 May, and on the situation in Greece and the Eurozone.