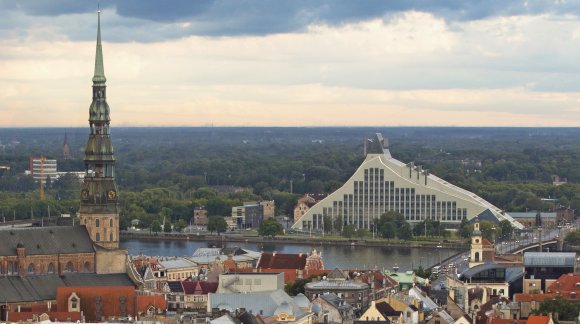 If you wander through the Old Town of Riga, you cannot miss the iconic edifice on the opposite bank of the river Daugava: the new National Library of Latvia building, known also as the Castle of Light.

It is one of the most significant 21st-century projects to be undertaken in Latvia, serving as a modern and multi-functional culture, education and information centre. It is therefore the perfect choice as the main venue in Riga for the Latvian Presidency of the Council of the European Union.

The library is a symbol of knowledge. It proclaims the importance of aspiring to gain even higher levels of knowledge, this being the reward for those committed to reaching the peak despite the challenge of getting there. The Presidency is an opportunity for the National Library to demonstrate that it not only symbolises the memory and knowledge of the nation, but is also a forum for exchanging new experiences and culture.

The Castle of Light in numbers

Why is it called the Castle of Light? 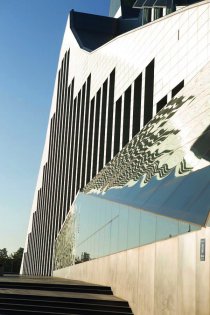 The building’s exterior and form reference two iconic Latvian folklore metaphors – the Glass Mountain and the Castle of Light. Legend has it that the Castle of Light sank when the people were oppressed, but then rose up from the depths of darkness to free the Latvian nation. This is symbolic of the wisdom that was lost in the darkness of war and invasion, but then regained by the Latvian people.

The building’s silhouette is reminiscent of the symbolic Glass Mountain, at the top of which a princess is waiting for her saviour – someone brave enough to climb that far.

From idea to completed project

The architect of the building is the internationally acclaimed Latvian-born architect Gunārs Birkerts (born 1925) whose ideas have taken shape in the form of outstanding buildings in the USA and other countries.

The first sketch of the new National Library of Latvia was produced in 1989. After 25 years of perseverance and creative work, the symbolic Castle of Light was completed in August 2014 when the building opened its doors to the public.

Interior of the Castle of Light. Photo: Andrejs Jaudzems

On 18 January 2014, in a symbolic act, thousands of people created a human chain to pass hand to hand more than 2 000 books from the old National Library of Latvia to its new home.

The Castle of Light is a unique building visually and emotionally. It is a physical shelter for books and a spiritual and emotional home for Latvian identity and the whole of our society.

The building has been designated as the main venue for the Latvian Presidency of the Council of the European Union in Riga. It is fully equipped and adapted to the needs of the Presidency.